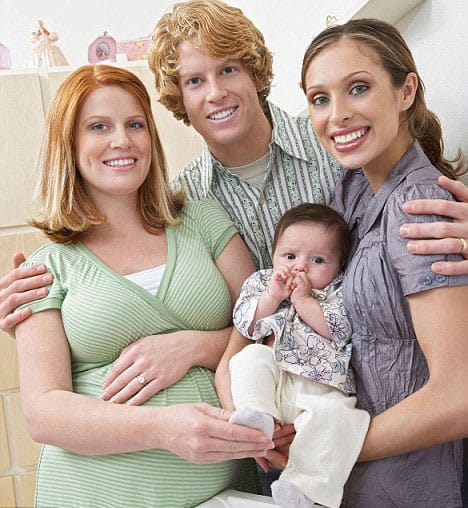 A new California law will allow family courts to find, on rare occasions, that a child has more than two legal parents.

San Francisco, said his SB274 was designed for the unusual circumstance in which more than two people have legal claims of parentage, and a twoï¿½parent limit would be harmful to the child.

A woman who broke up with her child’s biological father, then lived with a man who became the child’s main caretaker and who sought to establish a parental relationship after the couple separated.

A bisexual woman who lived with another woman but became pregnant with a man, with all three sharing parental responsibilities. A lesbian who bore a child with a sperm donor, who helped her and her partner raise the child before the birth mother declared she was no longer a lesbian and moved to terminate the others’ parental rights.

In such cases, Leno said, courts in four other states and Washington, D.C., have the power to recognize three parents, who might seek custody, visitation or some other role in raising the child. He said California’s twoï¿½parent limit has forced some judges to place children in foster care, even though a third person who had played a parental role was available.

“It is critical that judges have the ability to recognize the roles of all parents so that no child has to endure separation from one of the adults he or she has always known as a parent,” Leno said Friday after Gov. Jerry Brown signed the bill.

Leno said SB274 does not apply to grandparents, stepparents or anyone else who does not meet the state’s legal definition of a parent biologically, through marriage or domestic partnership, or by openly “holding out the child as one’s own” by taking in and caring for the child.

Brown vetoed a version of the bill last year that allowed a judge to recognize a third parent “in the best interest of the child.” This year’s version was narrower and will allow such a declaration only when the judge finds that failing to recognize more than two parents would be harmful to the child.

SB274 passed both houses on largely party-ine votes. It takes effect in January.