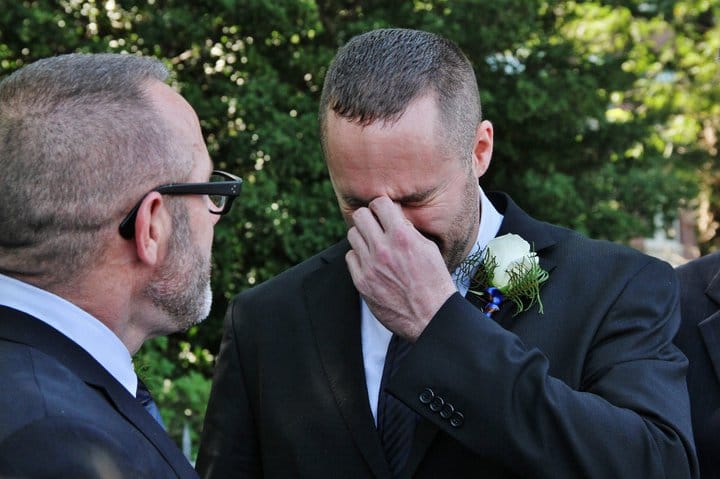 All citizens, irrespective of gender, have a constitutional right to marry, so said the California Superior Court on May 15, 2008. In the landmark decision, the California State Supreme Court ruled that same-sex couples can get married. This landmark decision meant that same-sex couples who wanted to tie the knot have the same legal rights as heterosexual couples.
As a result of this decision, the doors were thrown wide open at City Hall in San Francisco and throughout the Golden State. All one had to do was go to City Hall and apply. Arrangements could be made for a wedding ceremony there, or couples could make alternative arrangements for off-site ceremonies. Many churches and synagogues were right on board to provide their official blessings. 18,000 same-sex marriages have been performed, but what happens now to “happily ever after” for those couples who live out of state and just married in California? And what is the impact on the passage of Proposition 8 for the same-sex married couples who live in California?

On November 4, 2008, the majority of voters in California approved a constitutional amendment that specifies that marriages in California are between a man and woman only. At present, Proposition 8 is being legally challenged as unconstitutional. Numerous briefs have been filed by supporters and opponents alike, including the California General Attorney and Former Governor, Jerry Brown. On November 14, 2008, the Supreme Court of California issued a stay preventing same-sex marriages from taking place until a decision is reached on the constitutionality of Proposition 8. In the meantime, what about those 18,000 couples? Are they doing the legal “limbo rock”? Are they now facing those “Wedding Bell Blues”?

A NEW ERA: SAME SEX AND STRAIGHT SOCIETY WALKED IN STEP TO THE ALTAR

Prior the passage of Proposition 8 last November, the majority of California Supreme Court Justices made the trip to the altar an easy one for many same-sex couples. The first to be wed in San Francisco were Del Martin and Phyllis Lyon, pioneering same sex rights activists who had been a couple for 50 years. Since the decision, hundreds of weddings were performed for couples from California and elsewhere. The phrase, “By the powers vested in me by the state of California,had the San Francisco Convention and Visitors Bureau buzzing. Going to the “Chapel of Love” was no longer a tourist draw exclusive to Vegas: the “city that knows how”welcomed couples like Mike Silverman and Dave Greenbaum, who traveled from Lawrence, Kansas to wed, with open arms. Silverman and Greenbaum were previously “married” in a traditional Jewish wedding ceremony in Omaha, Nebraska and came to California to obtain civil recognition. But will Nebraska recognize their marriage when they return home?

FULL FAITH AND CREDIT BLUES: OUT OF STATE MARRIED COUPLES: ARE THEY REALLY MARRIED?

The 18,000 couples that made a trip to the alter perhaps believed that their marriages were valid not just in California but throughout the United States. However, legal assumptions can be dangerous. During the Clinton administration, Congress overwhelmingly passed the 1996 Defense of Marriage, which gives states the authority to not recognize same-sex marriages performed elsewhere. The Courts in Nebraska will likely reject the Silverman/Greenbaum marriage when they return home. Specifically, under Nebraska Constitutional Article 1, 29 and Nebraska Statutes 42-177, same-sex marriages are prohibited and the Nebraska Court will not recognize an out-of-state same-sex marriage.

CIVIL ACTION TO END A “NON-MARITAL” RELATIONSHIP: BREAKING UP IS HARDER TO DO

Without state court recognition, gay and lesbian couples have no access to the family courts in the event of seeking an end of their marital relationship. Instead, they must divide their property based on the state law of contracts and partnerships. This lack of legal recognition affects all facets of these committed relationships, including child custody and visitation, child and partner support, and inheritance rights in non-marital cohabitational relationships. Litigation is more complex and requires, in almost all instances, experienced and adept counsel.

The dissolution of non-marital relationships is one of our firm’s areas of expertise; however, this is the exception and not the rule for most family law firms given that this civil litigation occurs outside the familiar legal territory of our family courts. Children always come first in our firm’s representation, but for same-sex partners, the legal landscape of child custody and visitation is challenging. Unless there is a legal adoption or the parties are in a registered domestic partnership, the non-biological partner cannot automatically assert custody or visitation rights merely as a result of the parties’ relationship. On the financial side, the concept of implied contracts and sweat equity are less problematic.

In the California Supreme Court landmark decision involving the late actor, Lee Marvin, and his mate, Michele Trigona, the Supremes provided a legal platform for asserting contract, partnership rights and even the right to claim implied contracts based on personal efforts and services outside the bedroom as compensable. Marvin .v Marvin is consistently cited by the California Courts and other state courts as the leading decision in this field. However, when the case was returned to the trial court from the Supremes, Michele lost on all claims based on her claim of partnership and claims for services.

Most meaningfully, in the event of a medical emergency, one partner may not be allowed to access the other’s hospital room or be allowed to make decisions unless a separate health care directive or power of attorney was properly prepared and executed, authorizing such actions.

WHAT IS THE FUTURE FOR ALREADY MARRIED SAME-SEX COUPLES?

Under Article 1, Section 10 of the California Constitution, “no state shall pass an ex post facto law.” A similar provision is found in Article 1, Section 9 of the California Constitution. Ex post facto laws (or retroactive laws) are generally prohibited. At first glance, these constitutional prohibitions on retroactivity seem simple enough. The marriages were conducted before Proposition 8 was passed. However, so far ex post facto laws have been applied to criminal conduct but not to civil matters. For example, a new law that creates a criminal offense that did not exist when a prior criminal activity occurred
and for which a person has been already charged cannot be retroactively imposed on the accused.

Additionally, there remains considerable debate in the legal opinions and among legal scholars that civil matters such as contracts, including the union of marriage, may be modified retroactively by the enactment of a new state statute or constitutional provision. Both the state constitution and federal constitution prohibit legislation impairing contracts. The obligation is governed by the laws in effect at the time the contract was made. This presumably could apply to marriage contracts as well. However, this ongoing constitutional debate among bench, practicing attorneys and legal scholars is the impetus for the California Supreme Court to request briefing on this important constitutional issue and certainly creates more uneasiness for those gay and lesbian couples who made the trip to the alter. They are clearly now facing those wedding bell blues waiting to learn if their marriages will be upheld.

Marriage is a monumental and important decision for any couple regardless of sexual orientation. Since the passage of Proposition 8, no gay or lesbian marriages are being conducted and many California couples must put their marriage plans on hold pending the decision of the California Supreme Court. For those who already wed, their marriages are not a legal certainty at all. Should their marriages be invalidated, these couples will face an inconsistent body of law and case decisions and an ill-defined exit plan should their relationship end. If the Supremes do rule that the passage of Proposition 8 does not impact those 18,000 couples, the news is only positive for those couples who remain in California. Relocation by one or both of the marital partners may have significant impact given that most states do not recognize gay or lesbian marriages particularly on issues of property rights, child custody or support. At least one gay marital will be required to establish California residency to dissolve the marital status; however property rights and support obligations are more problematic when the other married partner does not reside in California. Residency of a minimum of 6 months or more in California is required before any legal proceedings to dissolve the marriage may be filed. Welcome to “Hotel California.”

Same-sex couples need to be aware of the significant legal challenges facing them now and in the future. Because of this legal limbo, we can expect gay or lesbian couples to feel more than uncertainty but perhaps self-blame, depression and feelings of isolation, lamenting their wedding bell blues. For these reasons, it is of utmost importance for gay and lesbian couples to be knowledgeable of the legal challenges their marriages may face in California or in the event one or both partners relocate. Legal consultation is an absolute must before moving forward in facing the legal challenges of same-sex marriages.